Set up on the laws of old parliament house, initially the embassy was a simple beach umbrella, then later, as the protest's aims broadened in scope (from land rights to the broad spectrum of issues faced by Aboriginal people across the country) and the number of protestors increased, more tents were added. 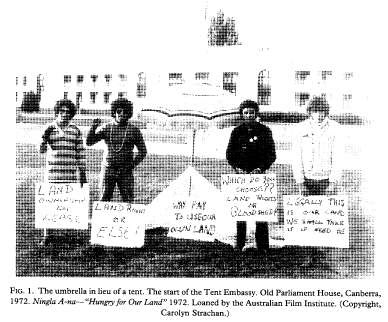 It is widely acknowledged that the establishment of the tent embassy was a focal point in Aboriginal politics and activism.

Email ThisBlogThis!Share to TwitterShare to FacebookShare to Pinterest
Labels: 1972, January 26

On the 1st of January 1901, the self-governing British colonies of Queensland, New South Wales, Victoria, Western Australia, Tasmania, and South Australia joined together to form a Federation. Under the new Constitution, each state retained a degree of self-governance, while a newly formed Federal/Commonwealth/National government was given a number of central powers.

Aboriginal and Torres Strait Islander people were excluded from the Constitutional Conventions held in the decades leading up to the enactment of the Constitution in 1901.

In 1967 sections 51 was amended and section 127 was repealed. Widely believed to be a watershed moment in Australian history, the constitutional amendments did not lead to the types of meaningful changes in the status and position of Aboriginal People that was hoped for at the time.

Image: A Souvenir of Australian Federation. National Library of Australia. http://www.nla.gov.au/guides/federation/images/hanky.jpg
Posted by Unknown at 2:36 AM No comments:

Email ThisBlogThis!Share to TwitterShare to FacebookShare to Pinterest
Labels: 1901, January 1

Welcome to the Blak History Project. It is an on-going project (years long) where I will try to provide a day-by-day account of historical events throughout the year.

I imagine that 2012, will be a year of building the structure of the site and creating the tools. There will also be many gaps in the first year. However I imagine that they will be filled in subsequent years.

Wish me luck. Cheers, Leesa
Posted by Unknown at 8:12 AM No comments:

A slowly evolving collection of events and happenings in Australian Blak History. Aims to provide day-by-day accounts of the history of Aboriginal and Torres Strait Islander Peoples in Australia. Inspired by Blak History Month created by Sam Cook and by @RealTimeWWII on Twitter.